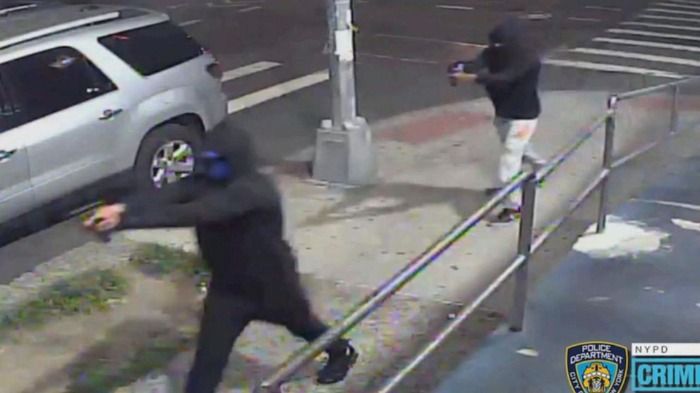 A pair of masked men unleashed a fusillade of gunfire on a crowded street in a New York City neighborhood Saturday night, wounding 6 people before getting in 2 black SUVs and speeding away, police said.

New York Police Department investigators said the episode appeared to be tied to gang violence, but that seven of the shooting victims were innocent bystanders, including a 72-year-old man.

The shooting occurred about 10:38 p.m. outside a barbershop and a restaurant in the city's Queens borough.

The video shows the pair of gunmen being trailed on the sidewalk by two other masked men, also wearing hooded sweatshirts, driving black suvs. Following the shooting, the gunmen calmly climbed onto the back of the mopeds and sped away.

He said three of the people shot are members of a street gang and are believed to have been the intended targets of the shooting.

He said the seven innocent bystanders left with non-life-threatening wounds ranged from age 19 to 72 and included two women.

He said the gunmen appeared initially to open fire on a group of people standing in front of a barbershop, but other people wounded were attending a party at a restaurant a few doors away.

No arrests have been made.